A Mundane Life – That’s All It Is!

The course of the day for the woman living in a hut in the shadow of the palace next door settled into a mundane routine of tedious tasks, chores, and responsibilities. None of this routine was extraordinary or exciting to her. She cleaned her house, washed clothes, food shopped, read books, watched TV, listened to music, and took up some appropriate hobbies. Often her thoughts wandered into more questions.

“Is this the greatness of the calling on my life that has been prophesied over me for so many years? Is this all there is? Surely there has to be more. What about the prophecies? Traveling. Preaching. Prophesying. Lord, do you remember that it was YOU who gave me Rivers of Eden? Did you forget that? I did not ask for it. You gave it to me. What does a 59-year-old woman do that has tried to obey God her whole life and yet no matter what she does, nothing seems to happen? Nothing at all, Lord.” 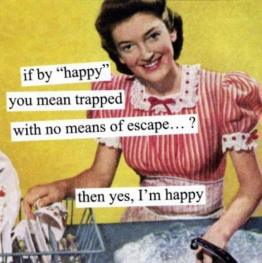 After the questions, the day still presented itself before her with no apparent change. So her only alternative was to return to the mundane just to keep herself busy. If she did not do something, anger and bitterness would set in along with a dose of envy and jealousy.

With tears in her eyes she tried to prove to God that she needed nothing but Him as she tended to her mundane life. With each passing day, she had to convince herself that she would be happy with whatever plans God had for her life. On the outside she tried to just make it through the day without losing hope. On the inside she felt trapped in nothingness without any means of escape. She could hide this from everyone but she could not hide the turmoil of her soul from God.

Each day she looked out the window and saw the magnificence of the palace right before her. It stood as an apparent testimony to God’s favor on the palace people. The lives lived in the palace were exciting and extraordinary, filled with abundant life. Book deals, conferences, and television appearances were some of the perks of the palace. The palace people seemed to have it going on. They seemed to be so……so………so…….perfect. These thoughts were justified in her heart as she turned her gaze from looking at the palace to seeing the reality of her mundane life in the hut.

In desperation and frustration, the cry of her heart took on a different declaration. She simply found herself saying over and over “Lord give me life! I need life! I want to live!” There were days where she felt as if she could not live the life that was before her. She often cried out to God, “Lord either fulfill the promises or take them away. I can’t bear to live like this anymore. My heart hurts Lord. My faith is dwindling right before my eyes.” Only those close to her saw the extreme anguish of her soul.

When promises seem long in coming and when times goes by in repetitive wearisome beats and when each day seems to take you further and further into obscurity, one simply loses hope. The woman lost hope. Hope deferred makes the heart sick. She failed to see that there was a lesson to all this madness. Her eyes were blinded to the reality that there was a purpose to her mundane life.

What does one do when there is really nothing much to do? The woman had waited for so long to see this vision from God come to pass. In standing in the reality of the promise, years had passed and she felt passed over and forgotten. She had kept her eyes on the promise and when nothing seemed to materialize, she felt unqualified to do anything else. She felt out of sync with her own life in time.